After realizing that neither Adam or I had contributed to this blog for exactly one year, I found it fitting to write about our dinner last night, which involved a new spin on the classic culinary combination of beets and goat cheese.

Since it's marathon training (for Kate), which means at least weekly pasta dinners, I've tired of traditional pasta dishes and had the urge to try something new. The beet ravioli seemed too complicated so I settled for whole wheat spaghetti and beet sauce. You essentially make a marinara sauce out of beets and butter and boy is it delicious. Rich, sweet and earthy thanks to a heaping tablespoon of poppy seeds, topped off with a dollop of goat cheese that melts throughout the noodles.

Photo and recipe (from epicurious) are below. And here's to blogging more than once a year! 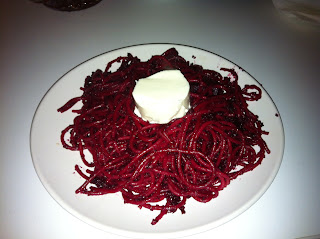 Farro Spaghetti, Beets, Brown Butter, Poppy Seeds1 pound red beets, cleaned1/4 cup olive oil1/4 cup water1 pound good-quality farro or whole wheat spaghetti6 tablespoons unsalted butter1 heaping tablespoon poppy seeds1 teaspoon kosher salt1/4 cup pasta water 1/4 pound goat's milk cheese1. Preheat the oven to 400°F. Place the beets in a glass or ceramic baking dish. Cover with the olive oil and water. Bake until a tester easily passes through the beets, about 1 1/4 hours. Let cool.2. Bring a large pot of salted water to a boil. 3. Peel the beets and cut into chunks. Add to the bowl of a food processor fitted with a metal blade and process to a rough puree. Add the spaghetti to the boiling water and cook according to the package directions.4. Add the butter to a 10-inch skillet. Turn on the heat to high. Brown the butter, about 2 minutes. Add the poppy seeds and toast for 2 minutes. Add the pureed beets, salt, and the 1/4 cup pasta water to the skillet. Stir to fully incorporate.5. Use a wire-mesh skimmer or tongs to remove the spaghetti from the pot and place them directly into the skillet with the sauce. Stir to combine.6. Divide the spaghetti into equal portions and place on warm plates. Use two round or oval soup spoons to form little balls of the goat's milk cheese. Place a ball on top of each serving.7. Serve immediately.
Posted by KP at 12:46 PM